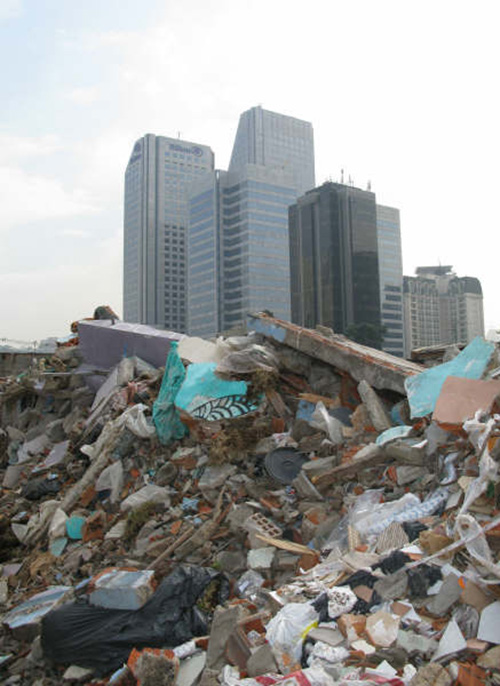 At present, 13,300 tonnes waste are disposed of at landfill per day, of which 9,000 tonne or 67% was Municipal Solid Waste (MSW), comprising domestic, commercial and industrial waste. MSW is disposed of at the three strategic landfills in Tseung Kwan O, Ta Kwu Ling and Nim Wan. According to the government, the remaining capacities of the three landfills will be exhausted in 2014, 2016 and 2018 respectively.  The MSW generation rate is 2.68kg per person/per day in 2010.

One of the most important documents for waste management in HK is the Policy Framework for the Management of Municipal Solid Waste (2005-2014). In the document, the government set out comprehensive waste management strategy to tackle waste problem and to achieve the following targets:

1) Waste avoidance and minimization – to reduce the amount of MSW generated in HK by 1% per year up to year 2014;

3) Bulk reduction and disposal of unavoidable waste – to reduce the total MSW disposed of in landfills to less than 25% by 2014.

The government is able to meet the recovery rate target, with the recycle rate of MSW at 49% in 2009. However, the actual MSW generated from 2003 to 2010 is on an increasing tread at around 2.2% per annum, while the total MSW disposed of in landfills in 2010 is 3.5% lower than 2003. Both figures suggest that the other two targets suggested in the Policy Framework are still far to be met.

Producers and users of products should be held responsible for the products they produce and consume. According to the government, “Producer Responsibility schemes (PRSs) place the obligation for managing certain products on the producers, distributors, or sellers of the products. For example, a well designed PRS spurs producers to design products that generate less waste by reducing the amount of packaging material or that can be reused or recycled.” 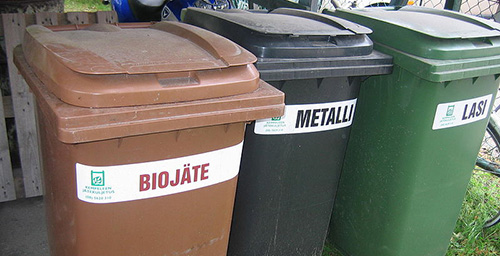 In July 2008, the Product Eco-responsibility Ordinance (PEO) was enacted to provide a legal framework for implementing PRS in Hong Kong. The Environmental Levy Scheme on Plastic Shopping Bags (the Levy Scheme) is the first PRS under PEO and has come into operation since July 2009. An environmental levy of 50 cents on each PSB distributed by retailers will be implemented by phases. Chain or large supermarkets, convenience stores, personal health and beauty stores are covered in the first phase. The government is now studying the feasibility to extend the scheme to all retailers in HK.

In January 2010, the government conducted a public consultation for the introduction of a mandatory PRS for waste electrical and electronic equipment (WEEE). The proposal covers five types of electrical and electronic equipment, namely, television sets, washing machines, refrigerators, air conditioners and computer products. The five types of equipment account for 80% of WEEE locally generated in HK. The government is now studying the feasibility to launch the scheme.

In January 2012, the HKSAR government conducted another consultation on Waste Charging with an aim to explore the types of charging mechanisms, including:

1) Quantity-based System – Waste charge is assessed on the basis of waste quantity.

2) Proxy System – Links the waste charge to an indirect indicator of waste generation, such as water consumption.

3) Fixed Charge – Each waste producer within the same category pays an identical rate regardless of how much waste they produce.

4) Partial Charging – Applicable to only a defined group of waste producers, such as the Commercial and Industrial sector.

More than 2,000 views were submitted to the government throughout the consultation period. Through the public support the direction of reducing waste at source, views diverge over the type of charging scheme the government should adopt.

The government did not state clearly what amount of charge would be imposed in the future on the consultation document. It is expected that second stage of consultation on MSW charging scheme with concrete figures and procedure will be conducted.

In 2008, the HKSAR government identified two potential sites to develop the Integrated Waste Management Facilities (IWMF), namely Tsang Tsui Ash Lagoons site in Tuen Mun and the Shek Kwu Chau site (to be reclaimed) to the south of Lantau Island. The first phase of the IWMF will occupy an area of about 10 hectares, with a treatment capacity of 3,000 tonnes each day. The government also claimed that the first phase IWMF would recover energy from the MSW which could be turned to electricity for supply to more than 100,000 households in Hong Kong, thereby reducing the use of fossil fuel for electricity generation.

After the Environmental Impact Assessment Studies (EIA) in 2011, the government has identified the artificial island near SKC as the preferred site for developing the first modern IWMF. And the government now is working on the preparation work. A number of Judical Reviews on incinerator are undergoing at the moment.